Contagions, Plagues and Outbreaks...Oh my!

If there was an airborne virus outbreak, how long would it take to spread?


How long would it take before the CDC could concoct a cure or antivirus to prevent further infection or spreading?


What are the odds YOU would survive?


In third-world countries, what seems like the average, common cold or flu to us, generally causes DEATH. This is something I don't think about often, but it's a very real, prevalent issue. Who's to say it could never be that way for America?

It doesn't seem to matter if it's a virus or bacteria, either way when I hear the word "outbreak" or "epidemic" a part of me panics. The perstering question of "what if" hibernating in the subterranean tunnels of my mind surfaces, stirring a primitive desire to survive (I'm sure names like the Bird Flu, Swine Flu and Mad Cow Disease don't help put my mind at ease either). The other more ignorant, lackadaisical part of me thinks, "Meh, it's America, it's the 21st century, nothing will happen here."

Since beginning the research and writing process for our post-apocalyptic book series, it seems as though I've taken a whole new interest in the unseen world of molecules, spontaneous genetic mutation and cellular biology. I used to think, yikes, cells and molecules and compounds, no thank you. Now, I think, oh, the possibilities!

How do you control something you can't see? The average person can't, that's what makes writing about a pandemic so interesting! Survival of the fittest, natural selection, evolution and genetic mutation happen all the time in nature so being able to write it into a storyline with our own little twist is fun!

Creating a dystopian world based on a make-believe (but very possible) virus allows us to get scientific and imaginative as we try to determine how realistic or far-fetched we want it to be. Figuring out what that virus looks like, how it effects the world and what happens to the small percentage of folks who can withstand it and survive is like painting a picture. What would that world be like? Every little piece is like a color and in the end....we have a masterpiece (or so we hope).

Contagion was a movie that helped me to actually see what it would realistically look like to see a disease outbreak.

Director Steven Soderbergh's 2011 thriller, Contagion was, for me, a realistic look at the "maybes" and "it could happens" and "what ifs." I've begun to seriously ponder what my chances of survival would be and what would happen to those who DID survive some sort of viral outbreak that plagued the world. Lucky for us, we get to explore the possibilities as we generate a virus and After The Ending world of our own.

My thoughts...
It wasn't interesting to me on an entertainment level because there were so many plot-lines and characters I could barely keep up. However, on an educational level, it was enthralling. It was very thought provoking and for me, any film that leaves me with a lasting imprint or with more questions means it accomplished something and was worthwhile.

Casting...
Having so many celebrities involved was a bit unnecessary and overkill, especially since they all die. It would have been more realistic had their been "real" people enlisted for each role to make the content of the film seem more true to life, especially since the audience sees the disease spread in a hyperlink narrative fashion, bouncing back and forth between numerous characters.

The reality of it...
The film portrayed people infected by the disease from all over the world. It illustrated how quickly the virus spread and how each person was effected and in what way. No one was safe, not even the scientists who were the masterminds behind creating the cure. I'm no scientist or scholar on this subject by any means, but the film seemed extremely plausible. Scientists and science writers praised the film for it's real life depiction of what could happen, how the CDC would be involved and the process in which they would go about quarantines, tracking the virus origins, gathering live cultures for testing and so on.

What it would take...
Influenza viruses are constantly changing. To create a global influenza pandemic (worldwide spread) may occur if three conditions are met:
Just a thought....
According to the World Health Organization (WHO), three to five million people get the flu every year. Just think of what would happen if an common epidemic turned into a pandemic and killed millions people....oh wait, that happened in 1918 when the "Spanish Flu" decimated 50 million people. When I think about how many people get the common cold and how easily it's spread, I'm not feeling the warm and fuzzies anymore. 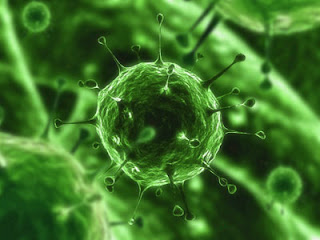 While the odds of the United States becoming inundated with the sick and dying due to the flu are minuscule, it would be ignorant to claim it could never happen.