Before The Dawn Prologue Reveal 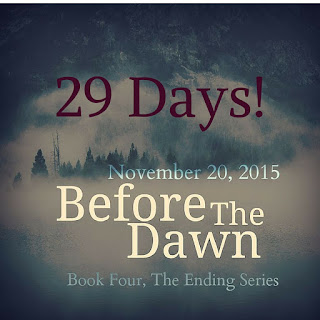 A livewire of tension and frustration, Anna descended the stairwell leading down to the long, underground hallway and its intermittent holding cells beneath the headquarters building. She couldn’t allow Gregory to kill the few remaining Re-gens, not when she needed them so badly. Her mind was awhirl with thoughts…possibilities…logic…arguments…excuses…pleas…none of which would be good enough if Gregory’s mind was already made up.
The first door on the right, a heavy, metal barrier set in the reinforced cement wall, stood ajar, and Anna could hear Gregory’s disinterested voice floating through the doorway. “…but some mistakes are just too great to make amends for, MT-01. I can no longer trust you. Your words are now meaningless to me.”
Howard passed the doorway and took up a guard stance on the far side of the opening. Anna stopped opposite him and hung her head. Now that she knew which Re-gen Gregory was addressing in the cell, she recognized the emotionless quality of his voice for what it really was—a mask to cover the betrayal he felt, to hide his utter heartbreak.
Mikey—MT-01, in Re-gen terms—had been Gregory’s favorite. He’d been loyal to “the General” before his death and had trusted Gregory implicitly, to the point of volunteering for the Re-gen program when it was still in the experimental phase. He was the only Re-gen that Gregory didn’t address using a Re-gen identifier. Or rather, he had been…before the uprising.
And while Mikey hadn’t actually participated in the rebellion—in the massive slaughter that had taken place during those few, terrifying minutes that the General’s people had been immobilized by Camille’s metal-controlling Ability—he’d admitted to knowing about it before it happened. How could he not have when the oracle and orchestrator of the rebellion, RV-01—Becca—had been the closest thing he’d had to a best friend?
“Pl—please, Father.” Mikey was sobbing, the sound sloppy and gut-wrenching. It was rare for a Re-gen to feel intense emotions, let alone express what they were feeling, and it yanked on the tangled wad of stored up heartbreak that Anna kept tightly wound inside herself. She couldn’t imagine what it would take to summon such an intense emotional response in her own son. “I kn—knew you w—would be safe,” Mikey said between gasping breaths. “I—I would have w—warned you if I thought you—”
His words cut off with the sound of flesh hitting flesh, but his sobs continued.
“There are few things I enjoy less than the bitter taste of disappointment,” Gregory said quietly, “and I could count on one hand the number of times I’ve felt such intense disappointment as I do now.”
“Pl—please, Father—”
There was another fleshy smack, closely followed by a wet crunch that brought to mind a sickening image of the Re-gen’s skull cracking against the cement wall.
“You were my favorite,” Gregory said in the silence that hung in the absence of Mikey’s sobs, thick to the point of choking. “I loved you like a son,” he whispered.
Anna couldn’t bring herself to step through the doorway, to enter the holding cell that she all but knew now contained only one living thing. At that moment, she refused to think of Gregory as a person—he was so much less.
Anna squeezed her eyes shut. Gregory truly had loved Mikey like a son; she knew it, had seen it with her own eyes. And he’d killed him anyway.
She just hoped he wouldn’t inadvertently do the same to his actual flesh and blood.

Continue on to chapter 1.
Posted by Lindsey Pogue